Heirloom Audio is one of our favorite vendors. We all get super excited when we are chosen to do a review for them! This time around, we were blessed with St. Bartholomew's Eve. This is the excited tale of the St. Bartholomew's Day Tragedy in France!

As always, this audio adventure is based off the work of G.A. Henty. Henty penned over 120 historical books! I had never heard of him before my first Heirloom Audio review of "In Freedom's Cause" three years ago. His works are recommended in a number of homeschool curriculum guides which makes Heirloom Audio a great homeschool fit for all. 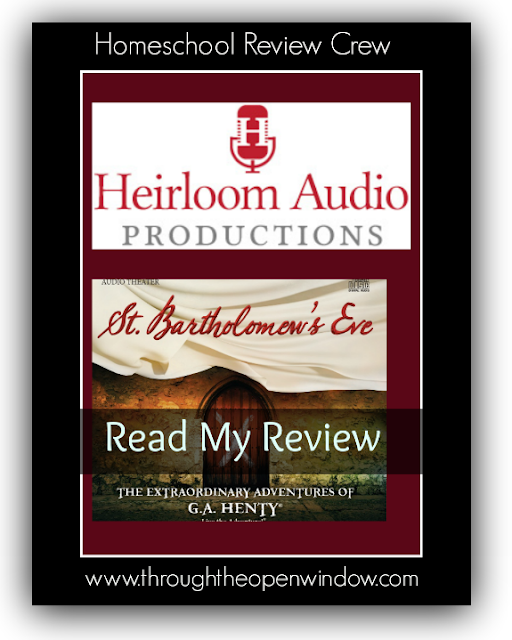 We received the 2-disc physical set as well as a digital download copy as part of the Live the Adventure Club. This set is over 2 hours in listening time, and recommended for children 6 through to adults, though younger children can certainly listen in. There's nothing inappropriate, but the fight scenes could be scary to younger kids. This drama features:
Heirloom Audio dramas always feature top acting talent work together to bring the story to life.

The St. Bartholomew's Day massacre in 1572 France was a planned wave of mob violence and assassinations targeting the French Calvinist Protestants known as the Huguenots during the French Wars of Religion. The massacre took place a few days after the wedding of the king's sister, Margaret to the Protestant Hendry III of Navarre, who would later go on to become Henry the IV of France. The massacre occurred on the  eve, in the night between the 23rd and 24th of August, before the feast of Bartholomew the Apostle and just two days after the assassination of Admiral Gaspard de. Coligny, who was the leader of the Huguenots. What began as an order assassination of the leaders turned into wide spread slaughter, and ended with the deaths of 5000-30,000 people.

The audio drama begins with Sir George discovering Ned and Sebastian are ditching church for other activities they deem more important and more interesting. Sir George seizes the opportunity to teach them story of the Huguenots, and how their war paved the way for their current freedom to worship.

"Whom shall we obey? The King of France or the King of Kings?"

The star player in this drama is 16 year old Englishman Philip Fletcher who has been living int he home of Henry Nacarre. Taking the side of the Protestants, young Philip and Henry join forces with Admiral Gaspard de Coligny. As the story progresses, Philip finds himself to be an accomplished soldier.

Cathernin de. Medicis, mother of Charles IX, doesn't trust the influence (or potential influence) the Admiral has over her son, so she approves the plan to assassinate him. If you are a history buff like I am, you will know that this is the majority belief that she was directly involved in the start of the massacre. Anyway, when this plan fails she plans with others to take out the other Huguenot leaders who are in town for the wedding of her daughter, Margaret, since her daughter is marrying a Huguenot. Before the sun came up on August 24, 1572, more than 2,000 people-including children-were murdered.

This massacre leads to more and more bloodshed. Philip finds himself behind enemy lines, and uses his skill to lead an army and fight through. Those who survive leave France, and go elsewhere to recover while the heroic Philip returns to England.

I love it. Heirloom Audio is often confused as an audio book,. but it's not. It's like watching a movie with your mind and ears. If you close your eyes, it's as if you are transported to the very places in the drama. Everything is so real, the sounds are great. The actors are of course amazing, and bring the characters to life as if they are really there. There's some music, a little narration, but the bulk is the back and forth of the characters. You can hear the action instead of needing to be told about it. Like a movie where you can see what is going on, Heirloom Audio provides enough auditory clues and stimulation that your mind can easily fill in with its own pictures.

These always have a huge calming effect on Mr. B. He loves listening to these in the car on trips to the dr, or to grandma's. It's a great way to continue our schooling even when neither of us are feeling up to a full lesson. We can listen, and then go into the lesson in more detail if needed.

As I mentioned before, there's also the Live the Adventure Club where you can get this, with bonus material to go along with it if you want. For this review, we just stuck with the audio drama, and I would ask discussion questions as we went along.

All in all, I think this is another fantastic audio drama from Heirloom Audio! It's definitely one of our favorites!

In the Reign of Terror


1.) Customization: Is it easily adaptable? Can we customize it to fit “us?” Can we modify or set our own schedule? Can we take breaks, jump ahead, or flat out skip?
You can listen as you want. This is a physical product, so there are no time limits. I wouldn't suggest jumping ahead because you'd miss the story. 2.) Value: Is it long lasting? Will it cover multiple grade ranges? Are you locked in to one specific grade level? Are there hidden fees?There are NO hidden fees. This is a physical product that kids and adults all will like. M and I both LOVE it, and we pack all of our Heirloom disks anytime we go on vacation!

3.) Attention span: Is it boring? Is it engaging? Is it varied enough for ADHD? Does it last too long?
Definitely NOT boring! We love it! It's great for auditory learners, too. It doesn't last too long, because you can choose the length of time to listen. We love it here, and find it to be calming, and entertaining. It captures our attention, and holds it for the duration of the program.  The action packed acting and sounds really bring this to life in a way I just can't put to words. 4.) Does it tie into other things we already have.

This is great for any study on religion history, religious persecution, French history, etc.

79 other people on the Homeschool Review Crew reviewed this! You should click on the banner below to read their reviews, too!