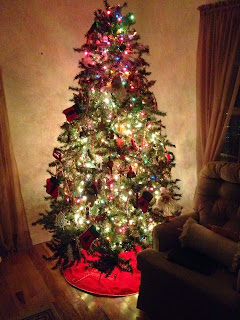 The Holiday Season is packed with memories for me. And some of those memories are from long standing traditions. One of those traditions was always a huge family dinner, with all of the extended family.

I can fondly remember piling into the car and heading to Mamaw and Papaw's house for Thanksgiving and Christmas. Being from a large family, all of the aunts, uncles, and cousins would be there. There was always so much food, play, and laughter. Ohhhh how I long for those days, just one more time!

It wasn't long until my papaw died from Cancer, and eventually, those gatherings just became too much for my mamaw. She eventually moved into a tiny home on our property, and we began hosting these family get togethers, with both Mom and Dad's family present. We would set up 2 tables, full of food, and everyone had a great time.

After my dad became sick, we had Christmas one last time-but it was just the immediate family. After that, the big dinners just faded away into distant memories until eventually, I found myself with just my niece and my son sitting in a restaurant booth for one holiday meal. I'll never forget an older man who was alone. He was without any family, and his wife had long since passed away. We invited him to eat with us, and it was one of the most enjoyable meals!

I so longed for those feasts of long ago that I began hosting a Christmas party every year. Unfortunately, I'm not sure we will be able to host this year due to health issues, but if we do I'll be sure to post pictures. It's still not quite the same as Holidays of yesterYear, but it's close.

Check out more posts from The Homeschool Review Crew!