Addison Cooke and the Tomb of the Kahn REVIEW 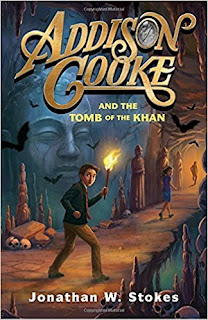 Hold on to your seats for this fast paced, action packed thrill ride of an adventure read!

Addison Cooke is back in his latest laugh-out-loud adventure: ADDISON COOKE AND THE TOMB OF THE KHAN (Philomel; on sale November 14, 2017; 9780399173783; grades 3-7). Complete with a cast of funny, kid-friendly characters reminiscent of The Goonies, and a quest to discover ancient secrets, Addison strikes gold once again in his second adventure: this time a journey through Asia in pursuit of the legendary tomb of Genghis Khan.

Fresh off a victorious treasure hunt and rescue mission in South America, Addison Cooke just cannot seem to avoid rogue bandits, pesky booby traps, and secret treasure troves lined with gold. Such is the life of a junior archaeologist. Just as reliably, as Addison attracts adventure, his aunt and uncle attract kidnappers! This time they find themselves becoming the pawn in a Chinese gang's plan to steal the Khan's most prized possession, his golden whip. When a third player enters the race, a Russian gang intent on nabbing the goods and exacting revenge for what happened with the treasure of the Incas,Addison and his friends find themselves once again caught in the middle, trying to rescue his family and stop the treasure from falling into the wrong hands!

Jonathan W. Stokes (www.jonathanwstokes.com) is a former teacher who is now a Hollywood screenwriter. He has written screenplays on assignment for Warner Brothers, Universal, Fox, Paramount, New Line, and Sony/Columbia. Inspired by a childhood love of The Goonies and Ferris Bueller’s Day Off, Jonathan set out to write his first novel, Addison Cooke and the Treasure of the Incas. Born in Manhattan, he currently resides in Los Angeles, where he can be found showing off his incredible taste in dishware and impressive 96% accuracy with high fives. Follow Jonathan on Twitter @jonathanwstokes.

Addison Cooke and the Tomb of the Khan is packed with adventure and awesome! We had never experienced any of the Treasure Hunter series, and so we were very excited to dive in when this got here. This is a good stand alone, and I don't feel my son and I were at a loss at any point not having read the previous work. I would highly recommend you read the previous because if it is anything like The Tomb of the Khan, then it has to be fantastic. The story line is a little out there of course. I mean, I don't know too many school kids who are out fighting off international bandits and booby traps whilst hunting for hidden treasures, but that's what makes this so fantastic. It's full of imagination, wonder, laughter, and excitement.

If you love Indian Jones like shows, then you'll love this. You and your child will be transported to a thrilling adventure around Asia along side Addison and his friends in this fast pace thrill ride of a read!

**I was provided a free copy in exchange for my honest review. I wasn't required to write a positive review, nor was I compensated in any other way. All opinions expressed are my own or those of my family.**