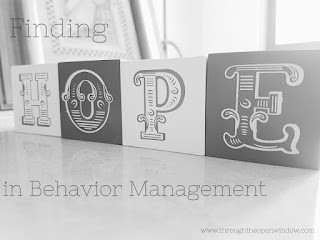 It's hard to know what to do when you've done everything you can to prevent a negative behavior, and one happens anyway. In this segment, we're going to talk about over correction.

Imagine you're sitting at home, peacefully reading or working on a project, when you realize your child has been VERY quiet. You know the quiet I'm talking about-the one EVERY parent dreads. When you find your angel you also find your wall covered in a crayon you didn't even know existed. Your child has been told at least 1.5 million times DO NOT WRITE ON THE WALLS! I know for us, we have a rule that he can only mark on paper that is designated as art paper. So, what do you do?

Imagine you go outside, and your child has marked ON THE side of the house. Perhaps they have marked on the bathroom mirror? Or maybe they have played with shampoo all over the tub? Maybe they have thrown clean laundry all over the living room floor? The possibilities are endless, but the consequence can be the same-over correction.

My son used to take a bar of soap and he'd rub it all over the bathroom mirror, and even the wall, as if it was a crayon. He had been told this was unacceptable, and the same as writing on the wall, and I would go in there and clean it up every time. Then came the fateful day I had had enough! So Mr. B was not only made to clean off the soap, but he was made to clean off the soap, clean down the sink, the toilet, the bathtub, the other walls, and ultimately the floor. Yes...his transgression of marking the mirror with soap led to an over correction of him having to clean the entire bathroom as a consequence. Not long ago he marked on the floor of the porch, so he was made to clean the entire porch.

Over correction is when they mess up one small area of a larger zone, and as a consequence of that behavior they must clean the entire zone. Little Johnny throws laundry all over the living room? Then little johnny has to pick up the laundry, fold it, put it away, and clean up the living room. After a handful of times, the joy they get from making the huge mess pales in comparison to the dread they have when they know they are going to have to clean up not only that mess, but a larger area as well.