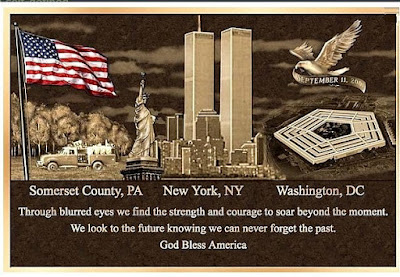 Where were you when our world changed forever?

I had just returned home from vacationing in New York. My mamaw had late stage Alzheimer's, and she required 24/7 care. It was my turn to be with her. My niece, K, was in 1st grade.  My mom was getting ready to leave to take my niece's mom to the doctor. I had just woke up when she told me a plane had had an accident, and flown into the World Trade Center. I had just walked into the living room when the 2nd plane hit. At the time I thought, "WOW! A major plane hit the WTC, and a second pilot must have been so distracted, they flew into it too!" Terrorism wasn't even in my mind back then.

My mom had to leave, and I was still glued to the TV. Then the other planes hit in DC and PA. I called my cousin to have her sit with our grandmother long enough for me to go get K from school. We were worried some crazy out there would take the chance to do something at the school with all the attention diverted to the attacks. I brought her home, and I had to turn the TV over to cartoons because my grandmother was becoming distraught over the images, thinking the TV was a window and she was watching our neighbors across the street.