A couple of years ago, another Review Crew member made a post on his Facebook page about the 2017 Total Eclipse. His post had said something about how they either lived really close to the path of totality, or they camped really close. Something like that. Anyway, that's when I heard about this eclipse. I showed the article to Mr. B who got VERY excited!

So, for the last couple of years we've saved all of our pennies, and he's tried hard to be on his best behavior. I planned and planned, and decided that Clingman's Dome would be the PERFECT viewing place. Little did I know, you had to have reserved tickets, at $30/person, to see the event from Clingman's Dome. So, maybe I hadn't planned as well as I thought!

It was now June, and the eclipse was just two months away. I had NO viewing area plans! I knew our cabin was going to be close to totality, but I knew that wasn't going to be close enough. I needed a plan, STAT, and I needed a backup plan! I purchased our eclipse glasses early, and made sure they were NASA approved from the start. Thank God! I didn't have to worry about THAT fiasco!

I also thought ahead enough to purchase Astrofilm for my camera! What I failed to do, was remember to remove said filter from my lens during totality so I could get a great shot HAHA! Sigh...that's ok! I had some great friends who were less than an hour away, also in TN, who got several AMAZING totality pictures!

I had planned on only staying until after the eclipse and leaving. So a 3 day vacation for M, Mr. B, and myself. We had NEVER taken a full family vacation before, so M said he really wanted to stay a week. I hadn't planned on that, but worked to make it happen. Then my niece decided she wanted to go, too. So now I had an extra person AND more days to try and plan! This was going to be GREAT! 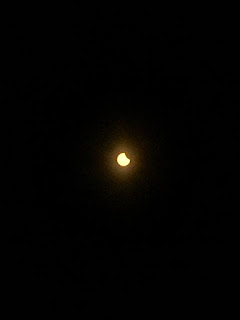 Just after first contact, when you could really see something was happening!

With only a week or so to go before leaving for our vacation, I still had no viewing plans. My plan was to drive to somewhere in the path of totality, and just pull over lol! We were worried about the weather, and I had told Mr. B that we'd wake up REALLY early and check the weather, and drive if needed to find clear skies.

I decided to call the Monroe Co. visitor's bureau and ask them if they could suggest somewhere for us to go. Sweetwater, where my friends were going, was having a townwide festival. We didn't need a festival. We just wanted to see the eclipse, then get back to Gatlinburg. As it turned out, Monroe Co. had a 16 Acre field in Telico Plains, complete with food and a DJ. Parking was $5.00, and the skies were forecasted to be crystal clear! I used paypal, pre-paid for parking, and the plan was set! Telico Plains was only a 75 minute'ish drive from our cabin. With traffic, it took us about 90 minutes to get there. I had talked with the tourism director, and she suggested dinner at a local diner after the eclipse. We had packed drinks and snacks of Star Crunch and Cosmic Brownies, so we were set!

We get there, and traffic is crazy! The atmosphere was alive with laughter and hundreds of humans gathered to celebrate in a common good- America's Great Eclipse. It didn't matter what color, sexuality, nationality, ethnicity, or religion you were-everyone was genuinely happy you were there! Kids ran and played with each other, adults chatted and laughed, and watermelon was shared by all. 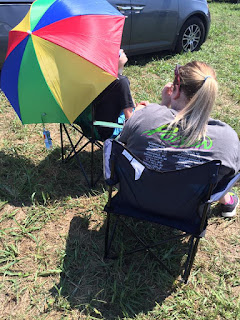 the DJ kept playing great songs that all had a cosmic theme. Every little bit they'd say something about the eclipse. What was happening, etc.

During the last few minutes before totality, they played The Final Countdown. Everyone was laughing and cheering. The temperature was dropping, and the overall light outside was dimming a little. The night bugs came out, and crickets were chirping. It was....odd. But it was still brightly daylight outside, just...different. Like the feel before a big storm kind of. 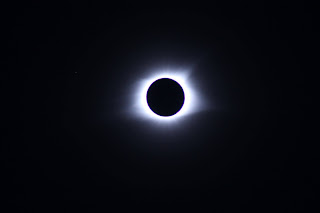 EVERYONE screamed or gasped! It was truly amazing. Never in my life did I ever dream a total eclipse could be so powerful, so moving, so....utterly magical. I was speechless. I'm still speechless. I could never, in a million, billion years ever put into words what I felt upon seeing God's wonder in the sky that day. It was DARK. Like DARK. It looked like it was 9pm at night, and it was just after 2:30pm! Crickets, frogs, all the night creatures were out. THERE WERE STARS! You can kinda see one in this amazing picture Pat, my friend Stephanie's husband, took in Sweetwater, TN. There was this perfect black circle that completely covered the sun. And out from the sun was this ethereal white, angelic like ring and glow. Words just can't describe it. My brain honestly had a hard time processing it all. Then I looked around. 360 degrees around us was a perfect sunset. 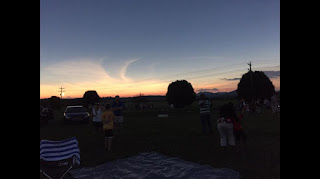 That was all the way around us. My phone naturally made it look brighter out than it really was. It was dark.

For 2 minutes and 38 seconds, we experienced this amazing eclipse. After, M and K said they had headaches. I figured it was from looking up for so long, then I read that headaches are common during a total eclipse. Something about geomagnetic something or other. As soon as the sun moved just past the sun, it was daytime again. 26 seconds, give or take a second, and it was fully bright once more. AMAZING!

We had decided to leave right after 3rd contact. So we loaded up the camp chairs, and hopped back in the car. We were on the road in record time, and everyone was hungry. There was no traffic backed up at all, and we thought all was well. We pulled into a restaurant called Bert's Hometown Grill. This is what the tourism director recommened. Bert's boasted award winning BBQ and World Class fries. Bert's did NOT disappoint! It was a fantastic meal. When we left we realized we maybe should have skipped Berts. Traffic was backed up FOR MILES. Remember that 90 minutes it took to drive 85 miles to get there? Well, it took us nearly 5 hours to drive less than 6 miles! We found a shortcut, thanks to Mr. B having an atlas with him, and we took that route back to Pigeon Forge. By the time we got back to the cabin, we were all exhausted. But, we were all still in awe over the amazing eclipse we had been blessed to have witnessed.