Our family loves audio books and audio dramas, and especially Heirloom Audio Productions. Heirloom Audio Productions heads "out west" in America with their latest audio drama, Captain Bayley's Heir. This 2.5 hour long listening adventure brings all the sounds and edge-of-your-seat action that you'd expect from the wild, wild west during the Gold Rush era.
For this review, we received the two disc, physical disk set. We also received access to the Live the Adventure Club, that features a lot of bonus content that I'll get to in a moment. 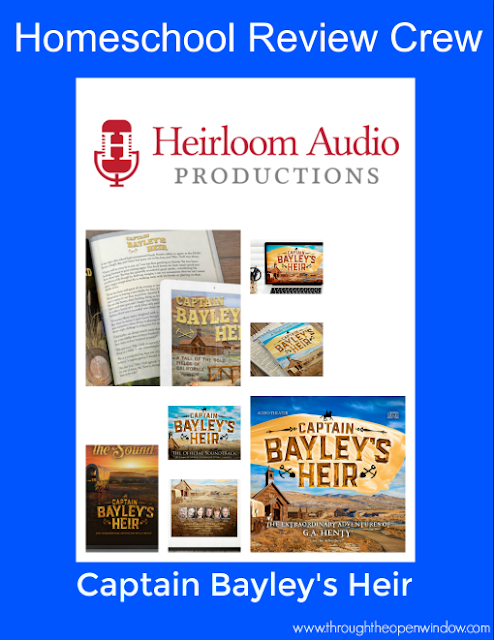 The story begins in England when one cousin, Harry, comes across his cousins, Frank, Fred, and Alice. Harry is quite different from his cousins. Harry's life hasn't been as easy going as his cousins. Not only was his seriously injured, he has barely had enough funds to survive. His cousins, on the other hand, have had the great fortune of living with Captain Bayley, who earned his fortune from the East India Co.

Harry's dog has fallen into a frozen lake, and being crippled from his injury, he's unable to save the pup. Frank, also a student at Westminster School, rises up as a hero when he saves the dog from certain death. He and Harry become very good friends, until Frank is falsely accused of a crime he did not commit. When he is threatened with expulsion from school, Frank makes the choice to escape to America, hoping to prove his worth to his uncle.
Frank's journey in America is not for the faint of heart. He nearly dies in a storm over the Mississippi River where he works on a flatboat, then he is attacked in an Indian ambush on a wagon train! He finally makes his way to California, just in time for the GOLD RUSH!

Along the way, Frank makes new friends, and each of these new additions helps him along his ultimate path in life, especially James Adams who travels back to England, and promises to deliver a message from Frank to Alice.

While Frank is in America, the on going story of Captain Bayley and his heir (thus the title) is playing out in England. Captain Bayley had a daughter, and he did not like her choice in marriage. As a result of this disagreement, the two had cut off contact with each other. Captain Bayley had no idea what had become of his daughter, and he now wanted to ask for her forgiveness. But, sadly, it was too late because his daughter had already passed away. So who was Captain Bayley's rightful heir? Well, as it turns out, this heir was no stranger to them, and had been right there all along! BUT, I can't give it away!

As you can imagine, there's a LOT more to the story, but I don't want to give it all away. You'll just have to listen to it for yourself!

Mr. B says this is his favorite audio drama to date. He loves it. He was captured from the first few minutes, and stayed engaged for the entirety of the adventure. We had to make our way to Cleveland for an appointment, so that made for the perfect drive to listen to this adventure, as well as revisit a few others! This was by far his favorite of the trip.

Now, I need to pause here for a second to explain just why Mr. B fancies this set as his personal favorite. He LOVES all things gold rush related. So much so, that I actually bought him his very old gold panning pan, and I will occasionally get him Alaskan or Californian pay dirt to pan for fun. He loves it, so this audio drama being all about the same topic thrilled him to no end!

Like the others, Captain Bayley's Heir includes bonus content that you can access through the Live the Adventure Club. This is a great thing the folks at Heirloom Audio have put together. Not only can you access any of your purchased adventures and their included digital content, but there's also an archive of radio shows to listen to, and a great message board community there, as well!
What is included in that bonus content? Well, I'm glad you asked! 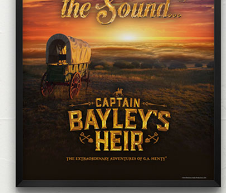 You'll get a digital Inspirational Hymn Poster that you can print out. These are always so beautifully put together, and this one is no exception. The sunset scene is just gorgeous! 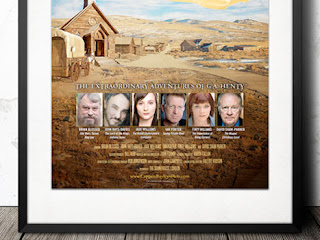 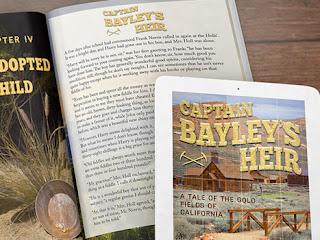 In addition to that, there's the eBook version of Captain Bayley's Heir. It's important to note that this is an audio drama, and not an audio book. There are a variety of characters, ambient sounds and music, and so much more. It's  like listening to a movie. And this is the book that this drama is based on. It's beautiful to see on a tablet reader! Seriously! 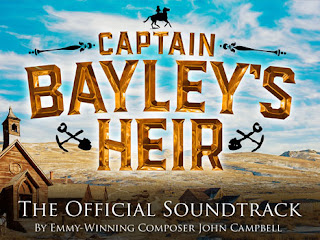 You'll receive a digital download of the Official Soundtrack that features the music from the audio drama. 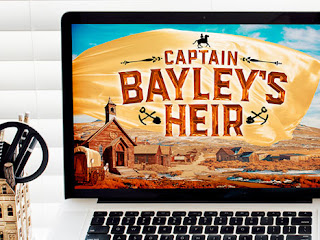 Then there's the included wallpaper background. This is really fun! 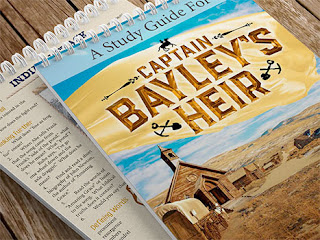 And last, but certainly not least, is my personal favorite-The Study Guide!

This study guide features discussion questions that provoke a lot of critical thinking and conversation about Captain Bayley's Heir. 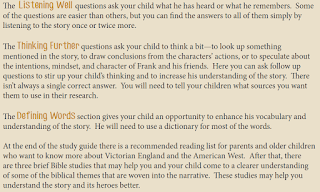 The study guide is a great tool, especially for parents, to use to help their children listen well, and listen for information. I know Mr. B will sometimes skip over details while listening, so this is great for him to narrow down his attention to focus on what he should be listening to, and not doddling off listening to the birds chirping the background. 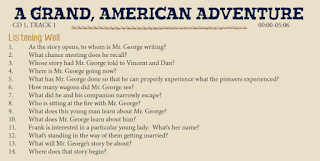 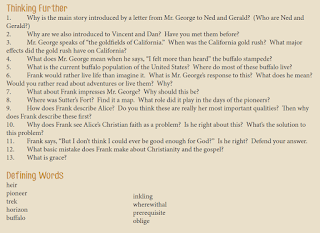 Here are some screen snips from the first track, so you can see what it is like. You can spend a great deal of time using this as an entire unit study, if you want. I have Mr. B verbally answer some questions, and sometimes I have him write them out short answer style. Usually, we discuss the thinking further questions. These are more abstract, and harder for ASD'ers to really "get." I want to make sure he understands it all, so we talk about these together.

The defining words are good as bonus spelling words for us. He loves to look up definitions, so we do that for fun with these words.

Overall, Heirloom Audio Productions has another home run! We have loved each and every one of their audio dramas, and look forward to more! These are not audio books, but more like audio movies. This one says from ages 6 to adult, but it's perfectly fine to let younger kids in on the fun-Though they may not want to really listen much. Mr. B's little sister, Princess J, enjoyed listening along with us here at the house (yes, we have listened multiple times,) but her little 4 year old self also enjoyed bouncing around from place to place. We love this, and highly recommend Captain Bayley's Heir to others!

1.) Customization: Is it easily adaptable? Can we customize it to fit “us?” Can we modify or set our own schedule? Can we take breaks, jump ahead, or flat out skip?

You can easily adapt to fit your schedule. These are physical disks, or you can download the digital from your bonus content. You can listen as you want, and break when you want. If you stop the disk in the player, you pick right back where you left off. If you jump ahead, you're going to be missing some story. And you can elect to use, or not use, the study guide as you want.
2.) Value: Is it long lasting? Will it cover multiple grade ranges? Are you locked in to one specific grade level? Are there hidden fees?
No hidden fees, and this will cover multiple grades The study guide is great for entire family learning.

3.) Attention span: Is it boring? Is it engaging? Is it varied enough for ? Does it last too long?
Definitely NOT boring! Unless you think edge of your seat action packed adventures are boring!

As far as special needs are concerned, these audio dramas always have a very calming effect on Mr. B. I can remember the first time I popped in In Freedom's Cause. He was sooooooooo hyper, and within minutes he was quiet as a church mouse, listening intently to the story develop.
4.) Does it tie into other things we already have.

This is a great American West study or Gold Rush unit study supplement, and would work well with any early American history program!

Please check out my other Heirloom Audio Productions Reviews!

The Cat of Bubastes

In the Reign of Terror

For more reviews, please check out the Homeschool Review Crew by clicking the banner below!