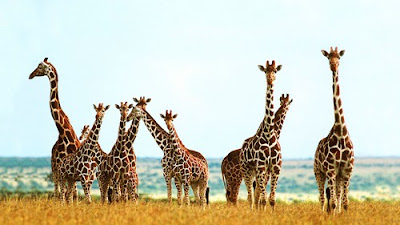 So...y'all, I've been watching this Giraffe for WEEKS! For more than a month, I've been tuned in to youtube to watch a giraffe's hind quarters, along with tens of thousands of others. Back in February I was kinda bummed thinking if only it was a month later, she could have a chance to have the calf on my birthday. Well guess what folks, it's now my birthday and they are saying it could be hours...that means she has a chance! PUSH APRIL! PUSH!

But I've been in awe over this. Why? Because of God's perfect creation with this giraffe. I have learned so much more about giraffes while watching April, and it's all led to me to see the beauty and wonder of God's creation.

These beautiful animals are designed by God to hide their pregnancy for a very long time. You'd never know it for months and months, until her belly starts to get big. And then they instinctively hide their labor. This helps for survival because mom will be vulnerable during labor and deliver, and obviously her new baby would be, as well. So it is kept hidden until the very moment of transitional labor when the hooves begin to pop out. Yes, there are signs of course....but it's not evident unless you are a person who knows what to look for like wax caps and utters filling. It just amazes me. All of it does.

She's been waiting around 15 months for this moment. Can you imagine being pregnant from 2015 until 2017! CRAZY!

So to April I say, PUUUUUUUSH! You have until 11:59pm to birth a calf on my birthday when I never thought it was possible!