I know I've said it before, but in our family, we REALLY love game night! To me, there's nothing much better than gathering friends and family around the table, tons of food and snacks, and great games. We host frequent game nights, and it's always a great time. This time around, we added a new game to the mix by Chara Games. They have a really fun adventure game called Commissioned . This game is intended for 2-6 players, and player interaction drives game play. This game is based on the history of the first 150 years of the church, and is historically accurate providing additional information in the Theme Appendix.

Here are a couple of videos that I highly suggest watching prior to playing:
And this one here REALLY helped us learn to play. I found it very helpful to watch multiple players playing.
If any of you have ever played pen and paper role-play style gaming with dice and such, you'll notice a lot of similarities, especially with the "Elder" role of Commissioned and "game master" of pen and paper gaming systems. The difference is, each person in Commissioned gets a turn at being "Elder" and the Elder doesn't dictate game play in the same manner as a GM would in pen and paper gaming. In Commissioned, all players work together to win-including the Elder. In role-play style gaming, the GM is usually the one controlling the "bad guys" you are fighting against.


Our Experience and Thoughts

Commissioned is a very fun, interactive game. I will say, watching the videos helped tremendously! There are a lot of rules to game play, and my brain gets foggy after a bit (HAHA) but we had no issues at all because we all watched the videos first, which answered any questions we would have had. In any event, the directions are easy to follow and read.

We set out to play our first game. The company says game play lasts about an hour, but for us it was longer due to the fact we were watching the video and learning the game at the same time. So we played for around 1 hour 40 minutes or so. I'd imagine if you aren't familiar with cooperative style gaming, it may take you longer to get used to it than it did us. For those who don't know what cooperative style gaming is, this is where you are playing together as a whole group to win the game, and not against each other to be the sole winner.

You play the game in rounds. Each player has a player board, and this board tells you the order of game play, has an area for your cards and a draw pile, and a bio of your chosen apostle, as well as your special power. Your apostle determines your cards, as they have your special power on them. Then you have 2 cards, that are separate from your apostle cards. Your special power can be used to "fix" things. For example, Andrew adds church members and John collects the books of the New Testament. The other two cards can be played on the board with a board effect, or used to collect books. The only time you lose cards from your deck is when you play them on the board (the special 2) or when an apostle's special power cleans them out.

First step of game play is shuffling your cards. You keep out the number of cards that is the same as the number of players, and put the remainder in your faith deck draw pile on your player board. This is called the ARM phase.
Second step is LIVE phase. The number of times you play this phase depends on the number of payers you have. Your player board will tell you what is involved with your LIVE phase.  Each LIVE phase starts with a trial, and trials are always things that have an negative effect. Next is PRAY, and each player takes 1 card and places it on the pray box. These cards will be shared after the die is rolled, and the elder will choose which two cards to use for game play (SHARE round.) Next the Elder rolls a message die. Ok, this is VERY RPG like in that you have to make your roll to be able to communicate with each other. If you don't make your roll, communication doesn't happen. In addition to not being able to talk, if you roll lower numbers of 3, 2, and 1 negative events take place such as losing a church member, or adding mission stops (stops any mission moves.) Then the Elder chooses movement on the board. There are mission moves, which have a set of requirements. These set up new churches. Fellowship moves are moves between established churches. Lastly under the LIVE phase, is growth where the Elder can choose to add to any church with 3 more pieces-unless it has a growth stop. This continues depending on the number of players, until you have 2 cards remaining.

Third step is called the MATURE phase, and you add more cards to your deck here depending on the number of points your remaining cards have.

Game play starts with the Elder, and the elder has the Elder Token. Game play, as well as the Elder Token, is passed the left after each round. The Elder makes the decisions during the 2nd phase (LIVE PHASE) that effects the game play for all players.
Here are a few photos. Sorry I didn't take more, we were too busy playing. 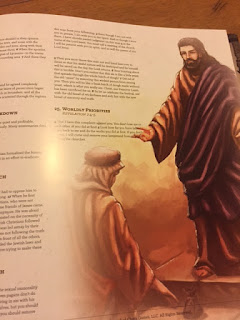 Part of the Theme Appendix. The artwork is beautiful! 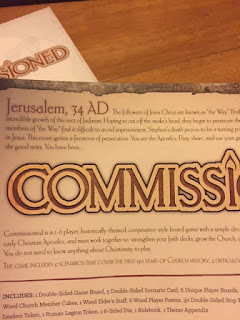 The game is historically based. 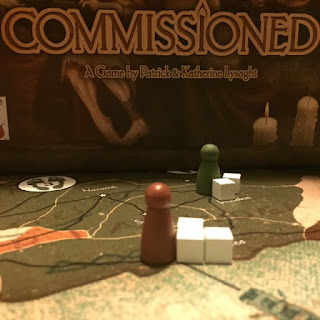 I tried to capture the texture of the board and box, and failed haha! Just know, it is VERY good quality. Even the little mission stop/growth stop pieces are thick and textured.


I like how there is a mix between cards, board game, and a role-playing like feel. There are different starting scenarios, 5 to be exact, and you choose your apostle to play from 6 choices. The objective is to establish churches in each region before game play ends. In addition to differing scenarios and characters, you can also add difficulty with tougher trials in your trial deck. M really enjoyed rolling the dice to make me unable to speak during the game. I wasn't very fond of that haha!

This game is intended for ages 14 and up. I would say that is pretty on par. Mr. B is good with playing this at a younger age because he has a lot of experience playing cooperative strategy games. I don't think I'd suggest younger kids with no experience playing this, as it is a complicated game to initially learn and play. Once you play it a time or two, it becomes easier, but it still requires a good bit of critical thinking!

Commissioned is a Christian based game, but it is not preachy or anything like that at all. All information is presented in a historical context, so I would recommend this to both Christians and non-Christians. We have friends who are not religious at all who loved playing this with us. The game board is double sided, with different cities on each side. It is VERY well made, as are all of the pieces. Overall, we really like this game and plan to make it a regular at Game Night!

Chara Games also has a new game that is just being released called 3 Seeds. I haven't received this game yet, but I expect to very soon. When I do, I plan to post a review after using it for Game Night. The gist of this game is that it is meant for 2-5 players, and it's a milder strategy card game that takes less than an hour to complete. Here is a "How to Play" video for 3 Seeds.


Please see what the other Crew Members had to say! Click the banner below to be whisked off to The Homeschool Review Crew!