HOLA! I am one who thinks a foreign language is a very important elective. I took 4 years of French in high school, and I earned a minor in French in college. Our society is a global society, where we interact with people of all different cultures, and with these cultures come different languages.
Children who are exposed to languages, other than their native language, at an early age are better able to learn a second (or more) language quickly when compared to others. I have always made sure Mr. B was exposed to differing languages, so that he could not only pick up key phrases, but learn to differentiate the sounds into specific words. From taking him to my college French classes, to asking his step mom to speak in her native language around him, I love that he has had the blessing to experience these languages. As you can imagine, we were thrilled to review the Start Set 1 Spanish program from Foreign Languages for Kids by Kids.
For this review, we received a complete starter set that includes sticker sheets, teacher's manual, Go Squish game, student workbooks for levels 1-3, flashcards, as well as DVDs of the first 3 episodes. This isn't a little set.
Foreign Languages for Kids by Kids (FL4K ) has real kids using real life situations to teach Spanish in an immersive manner. The creator is a homeschooling mom and lawyer who searched high and low for a foreign language program for her own kids that would be effective at helping them to learn a foreign language. When she came up short, she developed the award winning program we have been blessed with. This program uses humor and fun to help kids pick up on the language. Kids learn best when they enjoy what they are learning, and FL4K is certainly enjoyable!

How we used this and Our Thoughts:

The teacher's manual has a suggested schedule of use and a "how to use" section that I high recommend you read over. Repetition is key, and you are to watch a certain portion of the videos, then work your way into the workbooks. We tried to do this, we really did. The problem? The videos on the DVDs are so much fun, and we liked them so much, that we just watched the whole videos over and over again HAHA! By the end of the 3rd viewing, Mr. B was frequently using Spanish in his every day conversations for fun! Because HE has been using it so much, I'm learning as well! I caught myself yelling "DESAYUNO!" the other morning instead of Breakfast! He just came down this morning and said, "Mommy, I need desayuno." That was just from the videos alone!
The workbooks are great at putting a visual to the videos, so that you can SEE the words. Afterall, spelling and proper written communication is important no matter the language. The workbooks are in both Spanish and  English, and include a lot. You learn about more than just vocabulary words in a different language. There are cultural tidbits, etc. included. I do think the workbooks are a bit on the childish level. The videos show boys who appear to be elementary to upper middle school age, but the workbook art looks like it is geared to a lower age group than a student who would be 8th or 9th grade level. With that said, the majority of the clip art used uses real life photos, which to me is great, especially for special needs learners who may be unable to equate a cartooned drawing with the real thing. So major bonus points for that! 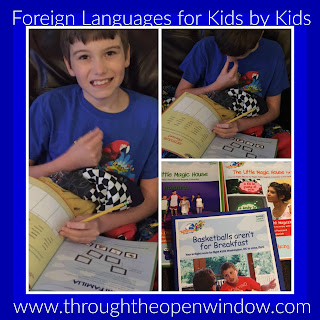 Overall, we really like this program. It's fun, and the videos are really funny. The first is titled "Basketballs Aren't for Breakfast" if that tells you anything!  Mr. B really picked up on things quickly, and the repetition really works. The intended schedule would work nicely, but Mr. B just liked watching the videos without stopping. I think the workbook art (NOT the clip art in it) is a bit childish, but the clip art associated with the Spanish vocab words are real life style photos, and that makes up for the cartoon'ish clip art. I'm not really pleased with the addition of the sticker sheets that ask your child to get your permission to put stickers on things as a visual aid reminder. He didn't ask my permission, and my house was covered in Spanish stickers. I'm not sure if that would be an isolated case or not, and I really should have removed those before letting him go through the box. The flash cards are nice, and we typically play games that we make up as we go with those. It was different for me to help him learn Spanish when my background is French, but the languages are so similar that it wasn't impossible or difficult-just a little different. I would LOVE to see this in French! We plan to continue using this product.

Does Foreign Languages for Kids by Kids pass my 4 Ingredient Test?
1.) Customization: Is it easily adaptable? Can we customize it to fit “us?” Can we modify or set our own schedule? Can we take breaks, jump ahead, or flat out skip?

You could skip, but that really wouldn't help you to learn the language. You can take breaks, and set your own schedule, but again that may hinder the learning.
2.) Value: Is it long lasting? Will it cover multiple grade ranges? Are you locked in to one specific grade level? Are there hidden fees?

It does cover multiple grade levels, but older students may find the artwork in the workbooks a little cartoon'ish. We rather enjoyed it and liked it, so that wasn't an issue for us at all. This is a physical product, so there's no hidden fees that I have encountered.
3.) Attention span: Is it boring? Is it engaging? Is it varied enough for ADHD? Does it last too long?
The videos are funny and use humor to introduce the language. I think it's great for ADHD and autism because of the real life setting. It doesn't last long at all. Actually, I'd prefer longer videos.
4.) Does it tie into other things we already have.

Not really. This is strictly a Spanish program.

I'm not the only Crew Member who had the chance to review this fun program! Please click the banner below to check out more reviews!

This post contains affiliate links. There is no additional charge for these links. I only include affiliate links on products I do truly love and enjoy using!