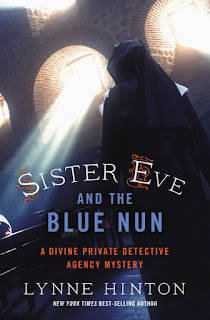 After a murder at the monastery, Sister Eve may need a miracle if she is to prove a dear friend isn't a cold-blooded killer.

Sister Eve, a motorcycle-riding nun with a natural (or is it supernatural?) gift for solving murders returns to the enclave she once called home and quickly finds herself confronting yet another mysterious death.

Someone has poisoned Dr. Kelly Middlesworth---a researcher on the life and ministry of 17th-century's revered "Blue Nun"---and a set of irreplaceable historic documents have disappeared before they could even be examined.

When all evidence seems to point to the victim's brother, Sister Eve sets out to expose the killer and learn the explosive truth those missing manuscripts might contain.

Chasing a killer is dangerous work, and as her two worlds collide, Sister Eve may need some heavenly help simply to survive.

I'm torn, truly torn. Ok, first: It's a good read. It's not boring, or slow. It's written well, and it's entertaining. With that said, I found it hard to follow because I can't picture a nun acting this way. I kept thinking of the movie, "Sister Act" where Whoopie Goldberg was just pretending to be a nun in the witness protection. She lies. Like, lies a lot. And she's torn between being a nun and being an private investigator. Now I can see someone being torn when it comes to being a nun, but once they make that commitment I can't picture too many who would be this torn over being a nun vs. a private investigator. And a lying nun? Sigh...

The Author has done her research into the Blue Nun (the person, not the wine...) and that's clearly evident. I wasn't fond of the internal dialogue portions, but the characters are well presented. It's a nice rainy afternoon book, but just not my cup of tea.

**I received this free in exchange for my honest opinion through Litfuse. I wasn't required to write a positive review, nor was I compensated in any other way. All opinions expressed are my own or those of my family. **