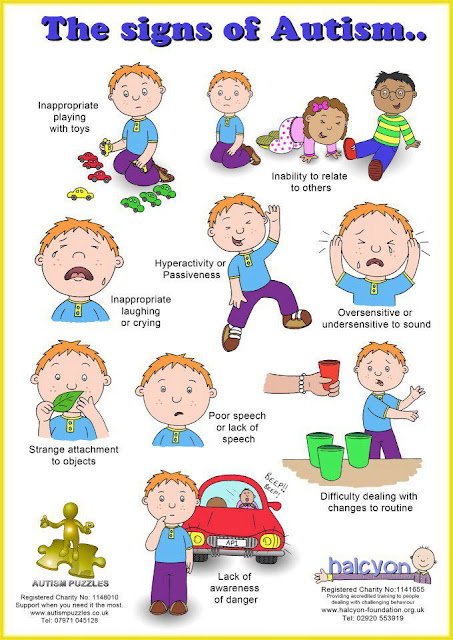 I was doing an online search for signs of autism and I found this photo. And I thought,
we always see posters or photos that tell us the signs of autism, but what does that even mean? "Inappropriate laughing or crying" what is that? Allow me to dissect this graphic and tell you what it means in our world. Keep in mind, if you know one child with autism, you know ONE child with autism. What these are in our world may be vastly different for yours. And please, if you are so inclined, go to the websites listed on this little image and let them know what an awesome chart they have!

1.) Inappropriate Play with Toys: We had a Little Tykes play garden. This little garden had a yellow "gate" on it. Mr. B would open and close this gate over...and over...and over for hours on end. No less than 2 or more hours at any one time. He also had train tracks and the bases to mega block cars. He would take these wheeled bases and "drive" them over those train tracks over and over for over an hour at a time. Even now, at 10, he will take legos and build replicas of cityscapes to destroy them with tornadoes, or he takes train tracks (wooden) and builds highways and interstate splits. He's never actually ever played with a toy the way that toy was intended.

2.) Inability to Relate to Others: If Mr. B feels it, he thinks everyone should feel it. If he likes something, then to him everyone likes it. He can't understand why I don't want to watch the Weather Channel for 12 hours a day.

3.) Hyperactivity or Passiveness: We have the hyperactivity. He has been on ADHD meds since he was 4, and even then it's not enough at times to help him control his behavior. There are times he is on hyper drive and there's no stopping him. He can't be still, not even for a few seconds. He says his body feels like there's a charge going through it.

4.) Inappropriate Laughing or Crying: Mr. B cried during the Lego Movie. If he gets in trouble, he laughs. He can't control it. He even takes his hands and pinches his jaws together to try and stop the laughing and smile, but he just can't.He knows it's not funny, but he can't control it.

5.) Oversensitive or Undersensitive to Sound: Mr. B has to wear ear plugs when going to the movies. During a thunderstorm, he will put his fingers in his ears. He can hear things I can't even hear when it is pointed out to me. Blenders, vacuums, drills, saws, and sudden noises cause him pain, sometimes excruciating pain.

6.) Strange Attachment to Objects: There have been many tears shed over trash. Trash that has been his favorite color for example. There was a few different packaging boxes that had sea green on them, and I had to keep them forever. I had to keep papers hanging on my walls for a couple of years. I've had to dig through restaurant trash for wooden blocks that had to be taken everywhere with us for over 5 years. It's a child's lovie on steroids. One child I know of had a meltdown over a clothes hanger. Right now, Mr. B takes a 30 sided die with him everywhere.

7.) Poor Speech or Lack of Speech: Mr B. did not talk, for years. He was over 4 before he started speaking, and then it was stringing together just 2-4 word phrases, or repeating everything he heard. He'snow 10, and talks all the time, but he will still resort to echolalia. I have been hearing him say more and more random and his own words, and it's music to my ears! He also had a speech impediment for a long time. Apraxia and Echolalia are major factors in autism, but you CAN overcome them with a lot of hard work.

8.) Difficulty Dealing with Changes in Routine: I once heard of a child who would ONLY get in the car on one side, and out on one side. When I heard this, I vowed then to now allow Mr. B to get caught up in a rigid routine. His cousin could not handle change, at all. So much so, that in school the teacher would rearrange the seating chart every month or so. Mr. B's cousin had to remain in the place because he couldn't handle the change. Mr. B has never had much of a problem with change. Any time I caught him developing a habitualized routine, I changed it right the.

9.) Lack of Awareness of Danger: Running out into traffic. Running down the stairs as fast as he can. Wandering off. Jumping off tall objects. Running out onto a not so frozen pond. Hanging off things. Bouncing off glass doors. These are just a handful of the things Mr. B has done over the years. Thankfully, he's developing a sense of danger awareness now.


These are just a few of the signs or characteristics of Autism. This list is by no means a comprehensive list! Feel free to comment below!