An Endless Christmas REVIEW AND GIVEAWAY!!!!! 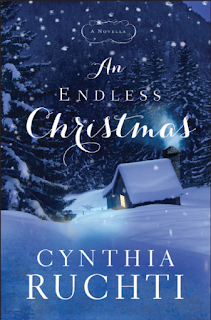 So I received this book to review, and I KNOW you aren't supposed to judge a book by it's cover but....this is a BEAUTIFUL cover! When M opened the package, he even said, "Wow! This is a beautiful book! It even sparkles!" So, my first impression was instant WOW! Then I turned to the pages. And again, WOW! This is a really great book that shows the true meaning of love and family. Micah invites his girlfriend Katie to his family's annual Christmas gathering. He has chosen this time to propose to Katie, and she says NO! Ok first, can you imagine that?! He gets up the nerve to ask her, and she musters the courage to go against the norm of saying yes just because it is a public event and says no. Ok....let that sink in for a bit.....I'll wait.....still waiting....ready? Ok. So, she says no, but now she's stuck for a week with this family-her rejected boyfriend's family, after a very awkward moment. After getting to know the family, she realize this isn't the picture perfect family they appear to be on the surface, but instead a family who turns to faith to get through difficult times together, instead of apart. This is a light, easy read with a well developed plot and characters. There's depth, emotion, and faith. What more could you want?!


About the book:
An Endless Christmas (Worthy Inspired, October 2015)

Too many people, too much snow, and too little room should be a recipe for disaster.

Christmas takes a very different turn when the guests of honor break up instead of announcing their engagement. Trapped with his family, they learn that love looks different than either imagined. Both in their eighties, Dodie and Wilson Binder celebrate every Christmas as if it were their last. This year, their grandson Micah is planning to ask his girlfriend, Katie, to marry him so they can celebrate with the whole family. But things go very wrong when she says, "no." Now they are stuck. Too many people, too much snow, and too little room should be a recipe for disaster. But sometimes too much is just enough. Especially when it's Christmas.

Drawing from 33 years of on-air radio ministry, Cynthia Ruchti tells stories of hope-that-glows-in-the-dark through her novels and novellas, nonfiction books and devotionals, and speaking for women's and writers' events. Her books have been recognized by Romantic Times Reviewers' Choice Awards, Selah Awards, the Gayle Wilson Award of Excellence, Christian Retailing's BEST Awards, and Carol Award nominations, among other honors, including a Family Fiction Readers' Choice Award. She and her plot-tweaking husband live in Pittsville, Wisconsin, not far from their three children and five grandchildren.


There's no getting out of Christmas now, despite Katie rejecting Micah's marriage proposal. Cozy up this holiday season with Cynthia Ruchti's new novella, An Endless Christmas. The Binder family celebrates every Christmas as if it were their last. Too many people, too much snow, and too little room should be a recipe for disaster. But sometimes too much is just enough. Especially when it’s Christmas.

Celebrate the holidays with Cynthia and An Endless Christmas by entering her $100 Target gift card giveaway!

One grand prize winner will receive:
Enter today by clicking the icon below. But hurry, the giveaway ends on November 30th. The winner will be announced December 1st on Cynthia's blog.

**I received a copy of this book in exchange for my honest opinion. I was not required to write a positive review, nor was I compensated in any other way. All opinions expressed are my own.**