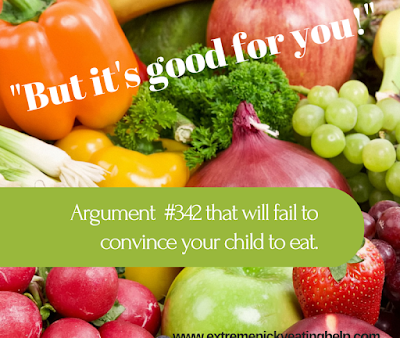 Some kids with autism lose words. Mine? He lost foods. At 2 he would eat anything! He loved chicken casserole. Rice was a HUGE hit for him. Noodles? BRING 'EM ON! Now? HA! Bacon. Cereal. Pepperoni and bread. He's so picky about foods that if they don't look right he won't even eat it! If we get pizza from a new place, I have to be very specific that they add no Italian seasoning to the top....or he won't even touch it!

I have always had him try things (with a trash can in hand....just in case. Gagging usually leads to puking.) But rarely do we have success. That seems to be changing. The other day he tried pork steak, AND LIKED IT! He requested it for dinner this week. Today he tried biscuits and gravy, scrambled eggs, and fried potatoes. He liked it all, but he had some issues with the egg texture. But he did take a few bites of the biscuits and gravy! M and I were getting excited talking about holiday dinners since B will be able to eat with us this year, instead of us fixing him a side of pepperoni or bacon. This year he will be feasting on rolls, ham, sweet potatoes, and hopefully some baked beans! I can't wait! But what do you do when you want to eat together as a family?

1.) We had a list of restaurants that we knew we could all find something we like. Even if that meant special orders. A great example of this is Roosters. Now, Roosters has a pretty varied menu, and great chicken tenders. Mr. B LOVES Chicken tenders...but not theirs since they don't look the way he thinks they should. They also have a variety of sandwiches such as Italian and pizza. So I order Mr. B a plain pepperoni sub on Italian bread. No seasoning. No butter. Just pepperoni and bread. He loves it!

2.) I alter what we are having so that we can have a family meal together at least once or twice a week. Breakfast is always pretty easy. I can fix pancakes, and we all like bacon. But dinners are harder. So sometimes we have pizza. Sometimes we will have battered fish. I hope for every meal, but realistically I know it probably won't happen. And that's ok.

3.) Try Try Try. I have him try something at least 5 or 6 times before deciding he just doesn't like it. I never make food a punishment, so if we are having a bad day I don't push him trying things. I want it to be a positive experience.

4.) Tackle the Textures! I let B play with the food with his hands if I think the texture may be an issue. I KNOW pasta is a given no. But I try. So I let him feel it first. That helps. Then I have him touch it to his face, then his lips. After that I have him lick it some. That introduces the texture slowly, instead of overwhelming him all at once. It has taken a week or longer before getting to the tasting stage with some textures. Patience is key.

5.) Don't give up. Eventually, new foods will be added.