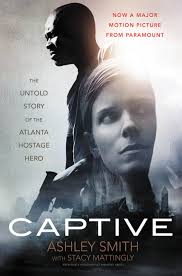 Wow...just....WOW! Not long ago I received an email invitation to review the book, "Captive" . I was not only to review the book, but help promote the movie based off the book. I had never heard of Ashley Smith, the Atlanta hostage situation, or anything else about this book turned move, until I read the book. I, of course, read the "about the book" section of the email, but I really had no idea what I was getting myself into. This book is....amazing. This is the true account, given by the hostage survivor herself, Ashley Smith, and written with the help of Stacy Mattingly. The way the story is told, the use of descriptive language, you can FEEL the tension, the anxiety, the fear, the raw emotion. You can see the apartment. You get a true sense, as close to as if you were there.

Plot Summary:
Ashley Smith is a drug addict who is trying to be a recovering addict, getting her life together, so that she can regain custody of her daughter. She had always been an A student, but eventually got messed up with the wrong crowd. She got married after becoming pregnant with her daughter, and her husband was violently murdered in front of her. This event was the catalyst that pushed her drug habit over the edge, until the point she gave her daughter to her aunt so she could continue with the drugs. After visiting her aunt's church to visit her daughter, she received a copy of "The Purpose Driven Life," and she began to change her life around.

Brian Nichols was accused of raping his girlfriend, and was on trial when he escaped and killed the judge, court reporter, a police officer, and a federal agent. A large man hunt was underway, but Ashley had been too busy moving into a new apartment to pay much attention. Her step dad kept warning her to stay in, but she didn't think there was any chance this escaped killer would target her. She left in the middle of the night to get cigarettes when she noticed a strange truck in the apartment lot. New to that side of the complex, she thought it was a neighbor. When she returned, the occupant of the truck was still there. She thought about leaving again, but decided to try and run to her door a few feet away. Needless to say, he caught her.

What happens next I will leave for you to read, but I will say the ordeal was life changing for them both. Brian Nichols, even though he was an escaped killer, treated her with kindness and respect (as much as possible given the situation) and she was blessed with new motivation and the ability to give up the drugs for good.

Overall:
"Captive" shows how God can use anyone and any situation to change people. Even in the darkest times, good can and does prevail. I found I simply could not put this book down. When I did, I kept thinking aobut what was going on in the book. I know Brian Nichols committed horrible acts of murder, but the manner in which he went to extremes to make sure Ashley was comfortable, and to avoid harming her, showed me that he is not a person full of evil. If that were the case, he'd not have cared if her bindings were too tight, or if she was hungry. Reading this, I realized that through God we can accomplish even the most difficult feats. Everything happens for a reason. The good. The bad. The tragic....it ALL happens for a reason.

We’ve all faced circumstances that have held us captive in some regard. What has held you captive? How did you find your purpose?

This is hard for me to personally answer. I suppose my own life choices have held me captive. I've struggled with anxiety related issues for years, and this has led to it's own form of captivity. But my son, Mr. B, he gives me purpose. I see in him so much potential for a better world one day. A better person than his dad or I have been. A better future. I want to instill in him respect, healthy choices, and love. And through that I, myself, must live the life I want him to live. I have to show strength by being strong. I have to show faith by being faithful. I have to show kindness by being kind to others.

Would you like to win your own copy of "Captive?" Please take a moment to enter below. Let me know what has held you captive, or what gives you purpose in the comments below! God bless!

"Disclosure (in accordance with the FTC’s 16 CFR, Part 255: “Guides Concerning the Use of Endorsements and Testimonials in Advertising”): Many thanks to Propeller Consulting, LLC for providing this prize for the giveaway. Choice of winners and opinions are 100% my own and NOT influenced by monetary compensation. I did receive a sample of the product in exchange for this review and post.
Only one entrant per mailing address, per giveaway. If you have won a prize from our sponsor Propeller / FlyBy Promotions in the last 30 days, you are not eligible to win. If you have won the same prize on another blog, you are not eligible to win it again. Winner is subject to eligibility verification.”