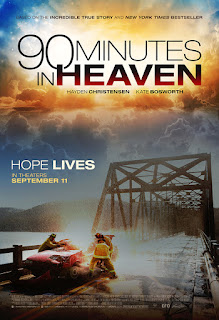 I am so excited to bring you this review of 90 Minutes in Heaven, the book. The book is written by crash survivor and best selling author, Don Piper, and it details his journey to Heaven following a terrible car crash, and his life and the pain following his return to his earthly self. When a semi crosses the center line, Piper's car is crushed with him inside. Emergency responders say he died instantly, and for 90 minutes this remained so. He says he woke up in heaven, and was in awe of the glorious wonders there in. A minister is praying for him when he miraculously returned to life on earth with only the memory of his experience in Heaven.

Overall the book is a great read, and I am really looking forward to the movie that is set to open in a couple of days. The book does not have an overly religious tone, and it centers a great deal on his life after waking up again, and the pain and struggle of recovering from such horrible injuries. I enjoyed it greatly.

About Giving Films:
Giving Films is passionate about sharing hope-filled movies and donating ALL of their profits to charities and ministries who serve those in need.  Beginning with their first film, 90 Minutes In Heaven, Giving Films is allowing all of us to be a part of making a difference.  Anytime you go to a Giving Films movie in theaters, visit http://www.givingfilms.com and select which charities you want to receive the profits from your ticket.  Their charitable organizations are Christian Alliance for Orphans, Faith Bridge Foster Care, Hire Heroes USA, Hope International, LifeWater, Street Grace, and World Vision.

About the book:
Paperback; 245 pages
Pastor Don Piper died January 18, 1989 when a semi-tractor truck crushed his car.  Declared dead by the first rescue workers to arrive on the scene, Don's body lay under a tarp for the next 90 minutes.  Don's soul, meanwhile, was experiencing love, joy, and life like he'd never known before.  Don was in Heaven.

When another pastor's prayers helped bring Don back to life, he became a living miracle!  Yet this is one miracle Don wished never happened.  Heaven's bliss was replaced by excruciating pain and emotional turmoil.  With the support and prayers of his beloved Eva, their three kids, and friends near and far, Don clings to his faith in God and fights to regain a semblance of his previous life.  The Piper family's incredible true story of perseverance and overcoming the challenges of life - and death - will bring hope and encouragement to all who see it.


I'm giving away a copy of this book to one lucky winner! Please enter below for your chance to win!

"Disclosure (in accordance with the FTC’s 16 CFR, Part 255: “Guides Concerning the Use of Endorsements and Testimonials in Advertising”): Many thanks to Propeller Consulting, LLC for providing this prize for the giveaway. Choice of winners and opinions are 100% my own and NOT influenced by monetary compensation. I did receive a sample of the product in exchange for this review and post.
Only one entrant per mailing address, per giveaway. If you have won a prize from our sponsor Propeller / FlyBy Promotions in the last 30 days, you are not eligible to win. If you have won the same prize on another blog, you are not eligible to win it again. Winner is subject to eligibility verification.”