Autism and the Holidays` 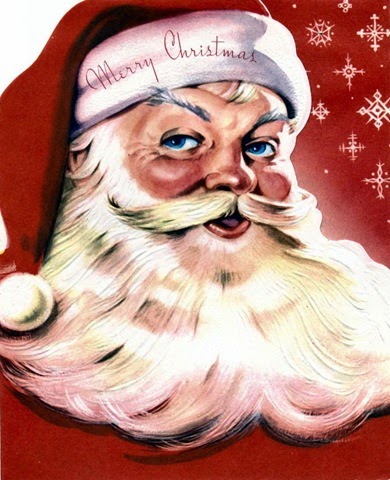 Autism doesn't necessarily make life harder, it just makes it different. It's during the Holiday Season that I feel this most. Everything seems to be a little different, not always bad....just different.

When he was still a tiny toddler, it was very important to me that he "get" the magic of Christmas. I was worried he'd never get the magic of the reindeer, Santa, elves, and everything that makes Christmas so wonderful for kids. During his days of early intervention, I asked all of his therapists who emphasize the magical aspects of Christmas in an attempt to "teach" him how to "get" it. And that is exactly what they did.

A few brought over various art projects, such as making a Rudolph head, or gluing cotton balls onto Santa to make his beard. But one very special speech therapist went above and beyond. Miss Jackie, as we called her, brought Santa to our house! Santa came, with his big bag of goodies, and delivered fruit and crayons. Then Santa sat down with my son, in his comfort zone, and colored for an hour with him. He spoke with him, and just spent time with him. For kids with Autism, a visit with Santa can be impossible sometimes. There's so much in the way of external stimuli that it is overstimulating at times, and right down scary. There are Sensitive Santa events, etc. But even those can throw off a schedule, or be hard depending on the location and time. I was so very grateful to her for bringing Santa into our little world, so that my son could have his own magic.

That is how we brought Holiday Magic to our autism filled lives. We taught the magic early on, so that the love of the magic would develop on its own. My son with autism is now 9. The magic of the holiday season is alive and well, and as strong as ever. Autism doesn't define us. Autism doesn't make things harder. Autism just makes things a little different, and sometimes even better than could have ever been with out it.

Here's how we handle the Holidays.

1.) Don't over do it. Yeah...easy said, right?  I typically host Thanksgiving dinner at my home. I always make sure to add in a few things my son will actually eat. One of the hardest things to deal with in terms of his autism is his picky diet. Thankfully, he will eat ham now. So he had ham and sweet potatoes, and he even tried a roll. This is a great time to try and introduce a new food, but don't push it. And don't sweat it if they simply don't want to take part. That was hard to deal with at first, for me. But now I take joy in the fact that I know he's enjoying himself, even if he's not at the dinner table.

2.) Try to reduce external stimuli. We try to avoid the large shopping crowds by splitting up the shopping. One day I'll go, the next day his step-dad goes. If he wants to go, that's fine, but we are armed with ear plugs just in case.

3.) EAR PLUGS! They are fantastic.

4.) We start opening gifts early, and open gifts later on, too. He really enjoys his gifts, and opening them. But we soon found that he did not like opening them all at once. He would rather open one or two, and enjoy those, explore them, etc., then move on to another. He doesn't get gifts through out the year, just at Christmas time-so we tend to go overboard. He gets a few things for his birthday, and little treats here there for various holidays, but Christmas is our big time. I try to group things together-but not overwhelmingly so. so He may have a box with books in it, but not so many he gets overwhelmed.

5.) Take breaks and expect to change plans. There are times when we may have planned to go to visit friends and family, and we just can't due to "an autism" day. And that's ok. Explain your situation, they will understand.

7.) Think outside the box for gifts. Who cares if "all the other boys" in the neighborhood are asking for the next big toy while yours only wants a kitchen timer? Don't buy gifts that YOU want, think about what truly makes them happy. One year, my son got a 3 pack of Viva paper towels. That's still one of his favorite gifts of all times! This year, he's getting a minimum/maximum thermometer and a digital kitchen timer! Remember, the gift is for them.

It is my hope that you find joy and happiness this Christmas. Don't sweat the small stuff, and just sit back and enjoy the magic of the season.